HomeBeatification Cause for our Foundress 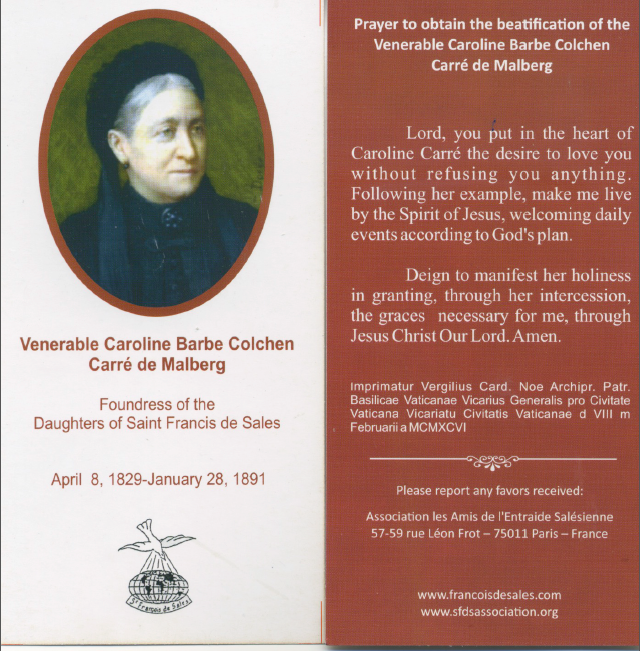 Prayer for the Beatification of Mmd Carre de Malberg

The foundress of the St. Francis de Sales Association, Venerable Caroline Barbe Colchen Carré de Malberg, is under consideration for beatification by the Vatican. The postulator for her cause for sainthood has asked to be sent testimonies of special favors granted after petitioning Mme Carre for help. Please join us in using this prayer to obtain what is needed for her beatification.

Lord, you put in the heart of
Caroline Carre the desire to
love you without refusing you
anything. Following her
example, make me live by
the Spirit of Jesus, welcoming
daily events according to God's plan.

Deign to manifest her holiness
in granting, through her intercession,
the graces necessary for me,
through Jesus Christ Our Lord. Amen.

Let us pray it often and ask Caroline Carré to intercede for us. 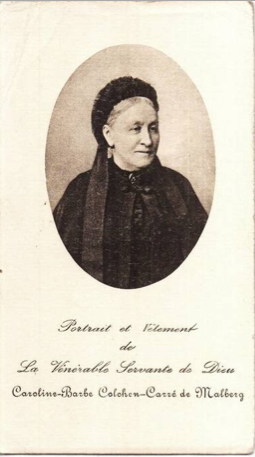 The General Council at the meeting of November 2015 requests that the envelope containing the original testimony, which should be sealed and marked Testimony Mme Carré, needs to be sent inside another envelope. Everything is to be mailed to:

The center in Paris will keep the register and send them on to Father Briñon in Rome. If there is also a pdf version, then this can be sent to a Councilor who will forward it to Paris and post on the website, if permission is given. If Associates need additional clarification, please contact your group or regional directress.

On the afternoon of May 9, 2014, the Holy Father Francis received in private audience his Eminence the most Reverend Angelo Amato, S.D.B., prefect of the Congregation for the Causes of Saints, and authorized the Congregation to promulgate the decrees concerning: the heroic virtues of the venerable Servant of God Caroline Barbara Colchen Carré de Malberg, 'mother of a family' (hard to translate it's more like 'wife and mother"), founder of the Society of the Daughters of St. Francis de Sales; born in Metz (France) April 8, 1829 and died in Lorry-les-Metz (France) on January 28, 1891. The next step in the beatification process will be to present the dossier on the miracle attributed to Mme Carré both to a scientific commission of doctors who need to certify that that there is no natural explanation for the cure and to a theological commission who will seek to determine that the cure is attributed to God solely through her intercession.

The announcement of Mme Carre de Malberg's cause for sainthood in 1909.

Over one hundred years ago, in June 1909, the cause for the beatification of our foundress, Caroline-Barbe Colchen-Carré de Malberg, was opened by the diocese of Metz, where she died. It was officially accepted for consideration by the Vatican in Rome.

What Is Spiritual Friendship?